Artichoke and olive naan pizza, ready in 20 minutes and perfect for dinner in a hurry! These are so easy to make and taste amazing! We like to have these for a quick weeknight dinner served with a nice green salad. Or they are equally good on their own for lunch. And did I mention 20 minutes? Yes, these naan pizzas only take 5 minutes to prepare and only 15 minutes in the oven! Result!

Your options for naan pizza are endless, you can keep it simple with Margherita, or go wild with all the veggies. It's really up to you. Get the kids involved too, they love making these! Artichokes are my jam though, especially on pizza. In fact, my whole family loves artichokes, they just can't get enough of them. But on pizza, that's always a favourite. This recipe is a riff on my favourite artichoke and spinach flatbread pizza.

I use plain naan for these, you could go for garlic and coriander naan of you wish. However, there is so much flavour in these I think plain naan is best. I've gone for pesto as a base to these naan pizzas, green vegetarian pesto, however, red pesto works very well too as does regular pizza sauce. Next toppings, mozzarella, chargrilled artichokes, kalamata olives and chilli flakes. A drizzle of olive oil and these are good to go. Pop them in the oven... 15 minutes and you are golden. Once in the oven, toast up some pine nuts. When your naan pizzas are done, top them off with the pine nuts, some chopped parsley and a squeeze of lemon.

Can I Freeze These Naan Pizza?

I don't recommend freezing these, they are so quick and easy to make that you won't need to freeze them and you probably won't have any leftover to freeze.

Can I Make These Naan Pizzas Vegan?

With some substitutes, yes, you can. You will have to make sure your naan are vegan, most are made with yoghurt. You will also need vegan pesto and a meltable vegan cheese. 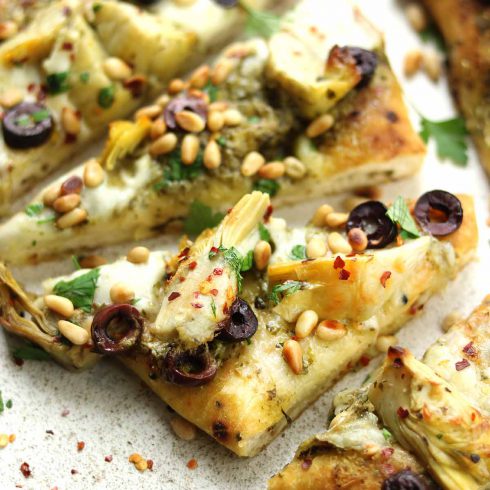 Prevent your screen from going dark

Hi, I'm Michelle. I'm here to help you make deliciously good healthy food for you and your family. There will be no crazy long lists of ingredients, no hard-to-find ingredients, just simple, good food that everyone will enjoy